Gabrielle Guerra Palma, CEO
Harker Heights, Texas
Gabrielle has been in Law Enforcement almost 20 years. She has been working and training K-9’s for 18 years. Gabrielle has worked three dual purpose police K-9’s-patrol service and narcotic detector dogs. She has also worked a single purpose tracking dog. Gabrielle is currently employed by the City of Harker Heights Police Department and continues to train dogs.
​ 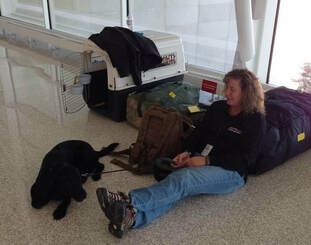 Katherine Gibbs Heselton, Secretary
​Maine
​
Katherine is the owner of Merrills Detector Dog Services.  She stated with Field Trial Dogs in 1995.  She was approached to train a drug dog for a local police department and her detection world grew from there.
Katherine bred a top hunting line and kept 3 dogs for detection work, one for the Maine Warden service, two for Merrills Detector Dogs for Search and Rescue.  One of those  pups certified with LETS at 1 year, both Land and Water.  This is where Billy Smith (the founder of LETS) took her under his wing and worked her through the Instructor Program of LETS.
Katherine volunteered at Laredo Job Cops, working with the students on detection training.  She trained a dog from start to finish that was donated to the Greenwood Police Department for Narcotics and assisted Mr. Smith and Mr. Hester in numerous narcotics and HRD seminars.  In addition, she conducted a project and experiment around HRD recovery in Ice.  Blind test were conducted in various ice situations, documented and tallied to prove different scenarios of Cadaver recovery in ice.  The same experiments were conducted at a later date using explosives in both ice and water.
During this time, her company had grown and requests were made for Explosive Detector Dogs.  She worked diligently with Mr. Hester, Mr. Smith and Jan Scofield (all LETS Master Trainers) to train explosive detection dogs from start to finish.
Over the years she has attended multiple seminars, classes and trainings on HRD, Explosives, and Narcotics.  In addition, she has hosted, taught and conducted many seminars in the U.S., Mexico and Argentina.

Marcia Becker, Duluth Minnesota
​Marcia was born and raised in Duluth MN and worked as a police officer with the Duluth Police Dept for 19 years, almost 15 of which were spent as a K-9 handler, K-9 trainer and member of the tactical response team. During that time she worked and certified 3 patrol K-9 teams through the USPCA and, in the later years, also certified in trailing through LETS.Upon retirement she began working towards instructor status with LETS and in 2010 became a trailing and HRD instructor and was voted in as a LETS Board member.
Marcia currently has one German Shepherd, Synder, who is cross trained in trailing and HRD. Synder and Marcia are members of the St Louis County Rescue Squad. 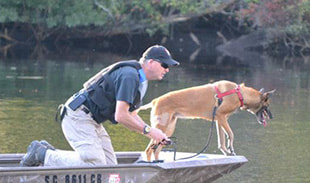 ​John has been involved in search work and K-9 training since 1990. He is a deputy coroner and cadaver detection dog handler with the Westmoreland County Coroner’s Office in Greensburg, Pennsylvania. He is a registered medicolegal death investigator with the American Board of Medicolegal Death Investigators. John is an Instructor, Certification Official, member of the board of regents, and certified cadaver detection dog handler with Law Enforcement Training Specialists, Inc.  He is police officer with Southwest Greensburg Police Department, and a certified Fire Fighter I with Greensburg Fire Department. John served as a cadaver detection dog handler with an elite military unit in Afghanistan supporting Operation Enduring Freedom. He is a consultant to law enforcement agencies and continues to participate in training and searches nationwide and in Canada.
John is a member of Pennsylvania Region 13 Task Force, City of Greensburg Emergency Management, Pennsylvania State Coroners Association, International Association of Coroners & Medical Examiners, and Westmoreland County Law Enforcement Association. 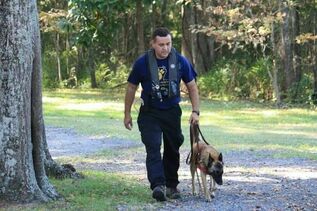 Eduardo Martinez Arriaga, Board Member
Mexico
​
Eduardo has worked with search and rescue dogs (live find and cadaver) for over 20 years.  He is an instructor and Chief Commander in Proteccion Civil in Nuevo Leon State, Mexico.
Eduardo started training with Bill Smith and worked has worked with several police departments and has been involved in some cases in Texas.  He has also worked cases in Mexico and South America.
As a LETS instructor in Cadaver (land and water) he has instructed a seminars to Police, Military and civilian in Mexico, Central America, South America and the Dominican Republic. 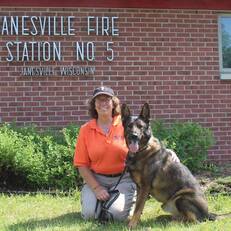 Carol Lussky, Board Member
Elgin, Illinois
​
​Carol started her career in Law Enforcement right out of high school.  She spent 5 years with the Mt. Prospect Police Department as a non-sworn employee.  In 1983 she began her career with the Hanover Park Police Department working patrol, crime prevention and investigations.  In 1996, while in investigations, she learned about and became a K-9 handler with the Illinois Wisconsin Search Dogs.
Carol retired from the Hanover Park Police Department to become Chief of Police in Pingree Grove, Illinois where she served for 10 years before retiring in 2015.  Upon retirement she began working towards instructor status and with LETS and in 2018 she became a trailing and HRD instructor and in 2019 was voted in as a LETS Board member.

Carol has worked and trained dogs in tracking/trailing and HRD and currently has two German Shepherds, Quest who is certified in Tracking/Trailing and HRD, and Bubba who is going to be an HRD dog.